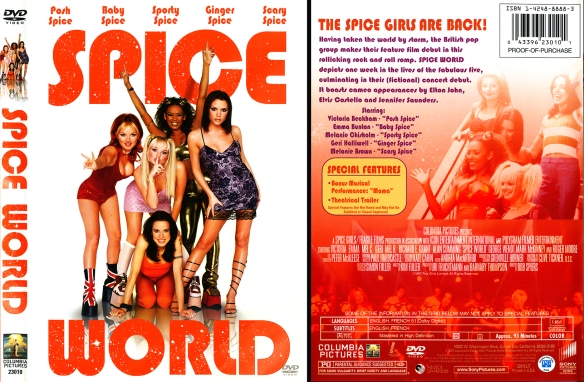 “Okay, girls, that was absolutely perfect without really being any good at all…”

If you came to this blog entry looking for a review of ‘Spice World’ the movie, let me save you a little time. The film is not very good. Now that that’s out of the way… 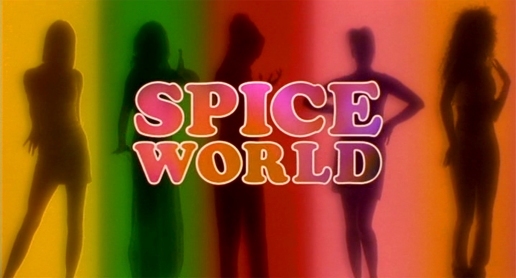 I must confess that I saw ‘Spice World’ in theaters back in the day. I’ve never been much for the group’s generic- but not altogether unpleasant- brand of music, but going into the theater I was hoping for at the very least a fun musical odyssey brimming with enough kitsch to be a cult classic. The trailer would have one believe just that:

On the plus side, the film’s certainly not wanting for star cameos. Elton John, Roger Moore, Bob Hoskins, Jennifer Saunders, Meat Loaf, Barry Humphries (aka- Dame Edna), Jools Holland, and Stephen Fry make appearances and- with the exception of Roger Moore- actually seem to be honored to take part. Gary Glitter shot a four minute segment for the film, but after his arrest on child pornography charges his scenes were deleted from the final cut.

The film’s visuals are appropriately saturated and candy-like, borrowing heavily from ‘Austin Powers: International Man of Mystery’, released earlier that same year. Their double-decker tour bus painted up like a bloated Union Jack is impressive. Baby Spice’s shoes- often as large as a double-decker tour bus- are equally impressive. The girls look great in their late-90’s shimmering DayGlo wardrobes. 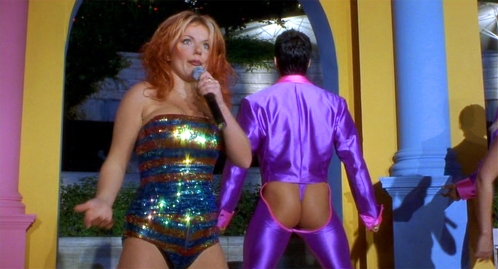 Being basically a musical it probably won’t be a shocker that the film has a fair number of music video-esque moments. The group’s second studio album ‘Spiceworld’ was released in conjunction with the film, and acts as the movie’s unofficial soundtrack. Or the film acts as the album’s 90 minute commercial. Either way, it’s not a completely unpleasant experience to watch five comely lasses prance merrily about. I found the cover of Garry Glitter’s ‘Leader of the Pack’ especially amusing. When the singing stops the movie grinds to a halt, however…

The first, and I suppose the most forgivable, are the Spice Girls themselves. They may be able to sing, dance, and mug suggestively during photo ops… but actresses they are not. Baby and Ginger are passable, but the best Posh can do is carry a lingering pout. Sporty and Scary have such thick accents (to my ears anyway) that the energy expended in understanding them is barely worth the effort. Sporty’s delivery is especially bad; the girl sounds like she’s got a disturbing aggregate of marbles in her mouth.

Another unfunny scene. Boot Camp- could have used less camp and more boots…

The second reason the film fails is direction… as in there doesn’t appear to be any. Couple that with what appears to be minimal editing at best and what we’re given is a series of vignettes that have little to do with one another, strung together with lip-synched performances. In one scene there’s a British character actor vehemently clamoring for the downfall of the Spice Girls, in another the Spice Girls run through the woods looking for a place to pee and run into ET-knockoff aliens, in another we’re subjected to a lame musical number on a speedboat. I’m sure this all seemed like a brilliant madcap adventure on paper, but the execution of these scenes is muddled at best. These disjointed narrative chunks could be rearranged in almost any order and it would make little difference to the plot.

Perhaps I’m just of the wrong age and sexual demographic to properly appreciate what transpires. Putting myself in the shoes of a late-90s thirteen year old girl for a moment does not alter my opinion considerably however. If I were she I’d certainly want less prattle and dreary first-take performances from old fart actors I’d never heard of . I’d want more Spice Girls singing songs and talking about shoes and boys.

Such was the (girl) power of the Spice Girls in the late nineties that all this mattered little. It raked in 77 million at the box office, over 100 million including video sales (roughly 147.5 million in 2014 dollars.) To put this in perspective compare that to other rock films such as ‘A Hard Day’s Night’ (1964) which only made 12 million on initial release (91 million, adjusted) or Pink Floyd’s ‘The Wall’ (1982) which made 22 million (55.5 million in adjusted dollars.) Even the contemporary film rock opus ‘Justin Bieber: Never Say Never’ (2011) made a measly 99 million in theaters.

This DVD is the special 10th anniversary edition. What this means in terms of bonus features I’m not sure. I believe the cut of the film is the standard version. It’s not letterboxed. The only bonus content is the theatrical trailer and a music video segment that was cut from the film . 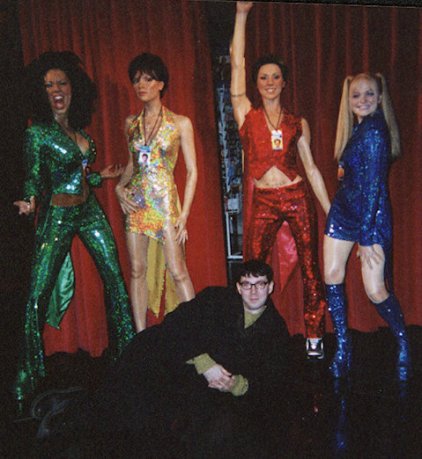 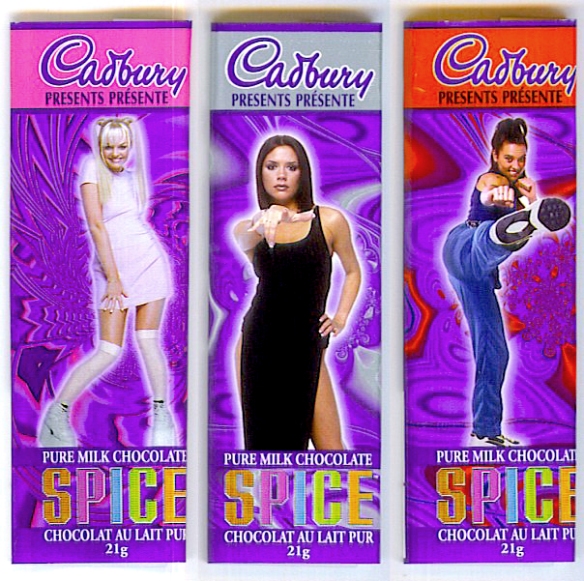 “On and on with the girls named spice.

You wanna get with us then you’d better think twice.”

Whoring out pop stars for a quick buck is nothing new, it”s been going on since the birth of rock and roll. The Beatles, Elvis, Michael Jackson. Hell, even Devo hawked Beta-max players back in the 80s.

With the exception of maybe NKOTB, there were no greater 90’s corporate shills in music than the Spice Girls. Pepsi, Tesco, and Polaroid were three of their largest collaborations, but they slapped their mugs on what seems an endless stream of crap. Slippers, party balloons, bean bag chairs, dolls, video games, jigsaw puzzles, perfumes…

Certainly one of the sweetest deals they ever made would have to have been with Cadbury chocolates. Unlike the rancid lollipops and other inedibles churned out by Chupa Chups, these candy bars were actually quite tasty. Not too surprising I suppose as Cadbury have always been a real class act.

I bought these examples in a Toronto hotel gift shop in 1998. I wanted a Scary and Ginger to complete the set, but alas they were sold out. I ate the chocolate almost immediately, but was amused enough by the packaging to hold onto the wrappers for all these years. You can still buy sealed bars on sites like eBay UK today, but after a decade and a half they’re probably none too palatable.

The bars came in ten designs, two for each girl,, and were sold worldwide. Or at least in a variety of English-speaking countries such as Australia and England. 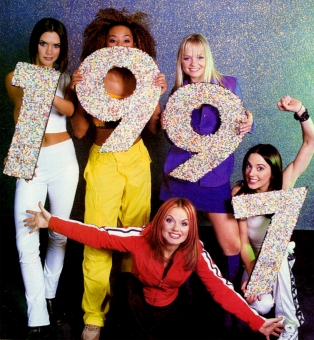